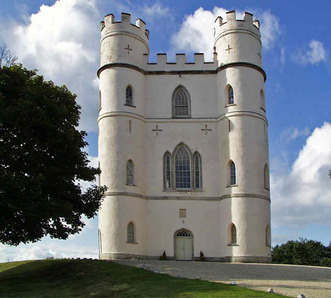 Aerial photograph published by kind permission of Devon and Cornwall Constabulary
Devon's most sought after civil ceremony and short breaks venue is perched high on Haldon Hill and stands in 5 acres of woodland in the heart of the lovely Devon countryside some 6 miles from the cathedral city of Exeter.   From its vantage-point, panoramic views extending to Dartmoor, Exmoor, the South Hams, the River Exe valley and its estuary can be seen.  If you manage the 99 steps, the view from the roof terrace on a clear day is wonderful.  You can see the Isles of Purbeck and Portland Bill in Dorset are visible and some say even Wales.

Built in 1788 by Sir Robert Palk, a past Governer of Madras, it is known variously as Haldon Belvedere, Lawrence Tower or Lawrence Castle, in honour of Major General Stringer Lawrence (d 10th Jan. 1775, aged 78), the founder of the Indian army.  At one time, most of the land in Dunchideock belonged to the Palk family who, up until the early years of the 20th century, lived in a very substantial house, the remaining part of which is what is now the Lord Haldon Hotel.   The building stands 244 metres above sea level and 26 metres high.  It is triangular in shape, built of rendered rubble stone, with circular turrets on each corner. One turret houses the spiral staircase leading to the upper rooms and the roof terrace, while the other two have ante rooms at each level.

The ground floor room has been dedicated to Stringer Lawrence where one can see the original memorial tablets recording Lawrence’s exploits.  A copy of a statue by Scheemaker dominates from the centre of this room.  It is made of coade stone and stands on a plinth of Torquay marble.

On the first floor is a miniature Ballroom where the Palks would entertain special guests. King George III was once a visitor here.  The features of this room are the large gothic windows, the delicate plasterwork and the original mahogany panelled flooring.  In one of the ante rooms is a fireplace depicting Lawrence’s coat of arms; each of the rooms in this turret has its own fireplace which was the only form of heating available until the restoration of the building in 1995. The chimneys are invisible from below; they come out of the crenellations at the top of the turret.

The top floor has a luxury apartment which is rented out for holidays and special occasion short breaks.

Haldon Belvedere is open to the public Easter to End of September on Sundays and Bank Holidays between 2pm until 5pm (last admission 4.30pm).  It is closed to the public at other times but available for Civil Weddings & Partnership Ceremonies, corporate functions, meetings and has accommodation that can be rented.

All profits from gate receipts and hires go towards the maintenance of the building and the grounds.  Donations are most welcomed.